Cinnamon is one of the oldest spices. It was very precious to people in Europe from the 16th to the 18th century because of the long transportation process from far away places in the Orient. Fortunately Cinnamon is easier to get nowadays, so you can enjoy its natural sweet aroma every day in a cup of ISIS Cinnamon Tea.
iSiS Cinnamon Tea is grown organically in Egypt without using any chemicals. This is approved by COAE (Center of Organic Agriculture in Egypt) and the DEMETER Association.
iSiS Cinnamon Tea is also specially certified as a fair trade product 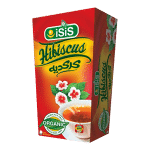